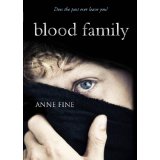 A dark and gripping tale of a young boy’s struggle to escape the horrors of his childhood – and the violent destiny he fears must await him.

Eddie’s mother can’t look after him; she can’t even look after herself.   The two of them live in a filthy house in constant fear of the violent and controlling Bryce Harris whose incessant bullying has reduced Eddie and his mother to cowering shells.  The only glimpse of the outside world Eddie gets is from a set of old video tapes of a children’s TV programme featuring kindly presenter Mr Perkins*.  When finally a concerned neighbour alerts the police and Eddie’s mum is admitted to hospital, Eddie finds himself living with kindly foster parents Linda and Alan, who gently help him to learn to trust again.   Eddie flourishes in Linda and Alan’s care, but the fostering arrangement is a temporary one and with his mother still in no fit state to care for him herself, Eddie must move on again.   He is adopted by the Stead family and as he enters his teenage years appears to have put his traumatic start behind him.   But under the surface, Eddie is still struggling to come to terms with his past and a shock discovery shakes him to the core….