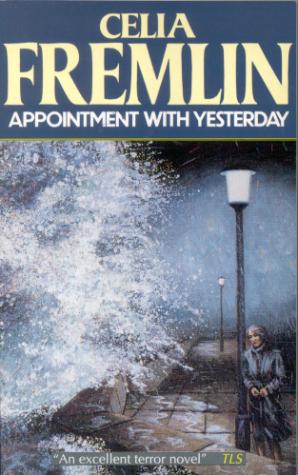 Milly Barnes, the middle-aged woman calls herself. This is not her real name, for Milly is on the run, driven by her terrible panic that at any moment the remorseless arm of the law will catch up with her. What has Milly done? Not until she has relived in flashback the wretched sequence of events that has brought her to her present pitch of desperation is the cause of her terror revealed.

‘Celia Fremlin is a name that should be shouted-appropriately-from the housetops.  She excels in novels of domestic intrigue and terror…APPOINTMENT WITH YESTERDAY is a delightful chiller…it will scare you into chills whenever you aren’t laughing out loud.’  Chicago Tribune
‘Not less horrible than illicit deaths are the horrors that lurk in female domesticity, and Celia Fremlin has long been the mistress of their fictional presentation.  Here, in the best so far of her always good books, she has fused both, in an excellent terror novel that is at once a study of near-mindless persecution and flight and a series of beautifully funny observations.’  TLS
‘This is Miss Fremlin at her best, and her best is very good indeed.’  Sunday Times
‘Extraordinary tension in horror story in which the terror is not of the body but of the mind.’  Evening News
‘Once again Miss Fremlin has come up with an excellent English equivalent to those New English nightmares of respectable ladies preyed on by villainy, circumstances or conscience – this holds its own with the best of them.’  Oxford Mail
‘Miss Fremlin’s achievement is in putting the mind and external world on the same seasaw and then spinning it until the demons of the one and the rscals od the other replace each otherlike crazed ice-hockey players.” – Scotsman