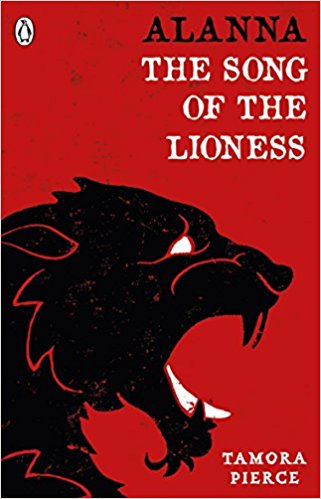 Alanna: Song of the Lioness

Alanna has always craved the adventure and daring allowed only for boys; her twin brother, Thom, yearns to learn the art of magic. So one day they decide to switch places. Disguised as a girl, Thom heads for the convent; Alanna, pretending to be a boy, is on her way to the castle of King Roald to begin her training as a page. But the road to knighthood is not an easy one. As Alanna masters the skills necessary for battle, she must also learn to control her heart and to learn who her enemies are. Filled with swords and sorcery, adventure and intrigue, good and evil, Alanna’s first adventure begins . . .

In the second adventure:
Still disguised as a boy, Alanna becomes a squire to none other than the prince of the realm. Prince Jonathan is not only Alanna’s liege lord, he is also her best friend – and one of the few who knows the secret of her true identity. But when a mysterious sorcerer threatens the prince’s life, it will take all of Alanna’s skill, strength, and magical power to protect him – even at the risk of revealing who she really is . . .