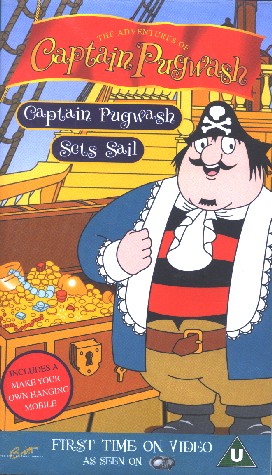 A selection of five episodes from the popular television series first transmitted on ITV 1 (CITV) in 1998.  This VHS collection was produced by John Cary for the Britt Allcroft Company (now Hit Entertainment) in 1999.

The Boat Race – Captain Pugwash and Cut-throat Jake race around Cutlass Island for a hundred doubloon prize. Jake tries to shorten the odds in his favour but Tom is of course on hand to move the goal post!

The Stowaway Sheep – There’s mayhem afoot on the Black Pig because Willy buys a sheep for a pet and Captain Pugwash steels some treasure from Cut-throat Jake Can a sheep save the day?

The Portobello Plague – A mysterious character with a bell warns Captain Pugwash there’s a plague in Portobello. What can they do, how will they eat? Willy has a plan but luckily Tom smells a rat!

The Double Dealing Duchess – Captain Pugwash accepts a paying passenger, who is not at all as she seem. Will Cut-throat Jake manage to trick the Captain or will Tom step in and save the day?

The Emperor’s New Clothes – Luck has blessed Captain Pugwash with a haul of Chinese treasure. Will a plot put together by Cut-throat Jake and his crew take the plunder from the Captain, or will the crew of The Black Pig make the best performance of their lives.