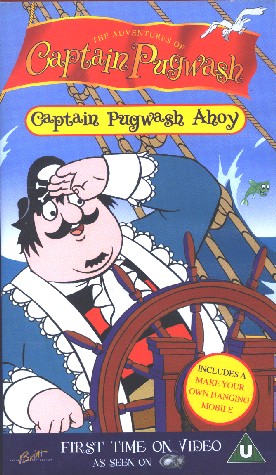 A selection of five episodes from the popular television series first transmitted on ITV 1 (CITV) in 1998.  This VHS collection was produced by John Cary for the Britt Allcroft Company (now Hit Entertainment) in 1999.

The Fat Cat – Opera diva Donna Bonanza loses her cat, Franco. The fat feline has been kidnapped by Cut-throat Jake so Captain Pugwash and his crew go on a wild moggy chase when a reward is announced.

The Vanishing Ship – the crew of the Black Pig can not believe someone has stolen their ship. When Tom spots that the thieves are sailing out of the harbour, he puts together a plot to foil the dastardly Cut-throat Jake.

The Dingly Dangly Crab – Health and fitness keep the crew of the Black Pig on their toes until mystic Myfanwy takes Captain Pugwash for a ride. What will be the result?

Chest of Drawers – Donna Bonanza outrages Captain Pugwash when she demands his treasure as a contribution to her European tour. The Captain has a plan to recover the treasure from the San Fandango, but Cut-throat Jake has beaten him to it. Who will win?

Hot Chocolate – Smuggling is a severe offence, but when tax is levied on chocolate, the captain can’t resist the urge to earn some extra money. Cut-throat Jake also has a plan to cheat Captain Pugwash out of his earnings. Will it be a sticky end?