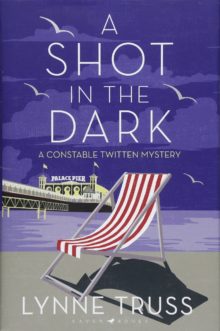 A Shot in the Dark

The charming first novel in a new comic crime series, from one of Britain’s most-loved writers, the incomparable Lynne Truss

Brighton, 1957. Inspector Steine rather enjoys his life as a policeman by the sea. No criminals, no crime, no stress.

So it’s really rather annoying when an ambitious – not to mention irritating – new constable shows up to work and starts investigating a series of burglaries. And it’s even more annoying when, after Constable Twitten is despatched to the theatre for the night, he sits next to a vicious theatre critic who is promptly shot dead part way through the opening night of a new play. It seems Brighton may be in need of a police force after all.

‘More Marx Brothers than Agatha Christie, this is crime fiction turned on its head – a giddy spell of sheer delight’ Daily Mail

‘A farce that gathers hilarious pace with every page . More Marx Brothers than Agatha Christie, this is crime fiction turned on its head – a giddy spell of sheer delight’ – Daily Mail

‘[An] entertaining new crime series . Truss’s affection for a rollicking, twisty caper has transferred to the page with ease . There’s some fine storytelling on display here’ – The Observer

‘With plenty of brightly coloured bucket-and-spadery, including ghost trains and Punch and Judy and variety acts, this clever, tongue-in-cheek escapade is a perfect summer read’ – Crime Books of the Month, the Guardian

‘It takes a writer of Lynne Truss’s wit and intelligence … to take on both the cosy and comic fields, shaking them up to forge something fresh and beguiling … Delightfully witty’ – Barry Forshaw for The i

‘This book is as much a comedy as a crime novel. Lynne Truss is a national treasure, and this is a gentle, complicated, humorous tale’ – Literary Review