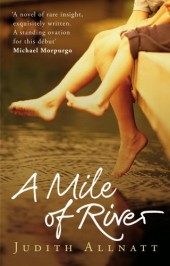 A Mile of River

It is 1976 and England is suffocating. The long, dry spring has given way to a summer of severe drought, with standpipes in the streets and a rallying cry to ‘save water, share a bath!’ For the farmers, life has become a living hell – a daily struggle to make ends meet. The fields are tinder dry, the earth is dusty and scorched and the rivers are drying up to a trickle.

Jess and Tom live on a remote farm in the English countryside with their increasingly difficult and brutal father, Henry. Their mother, Sylvie, walked out years before and Jess is struggling with the role of mother figure to Tom, as well as skivvy and hired hand for her father. Jess just wants to be a normal teenager, to go to dances and kiss boys, to take her exams and dream of a future far away from milking cows and ploughing fields. Daydreaming about her mother’s return, Jess discovers Sylvie’s old diary and begins to uncover the shocking truth about her disappearance.

As the drought grips ever tighter, as the water level of the river begins to drop, the menace in the air builds until it reaches boiling point, with a confrontation between Jess and her father that has devastating consequences.