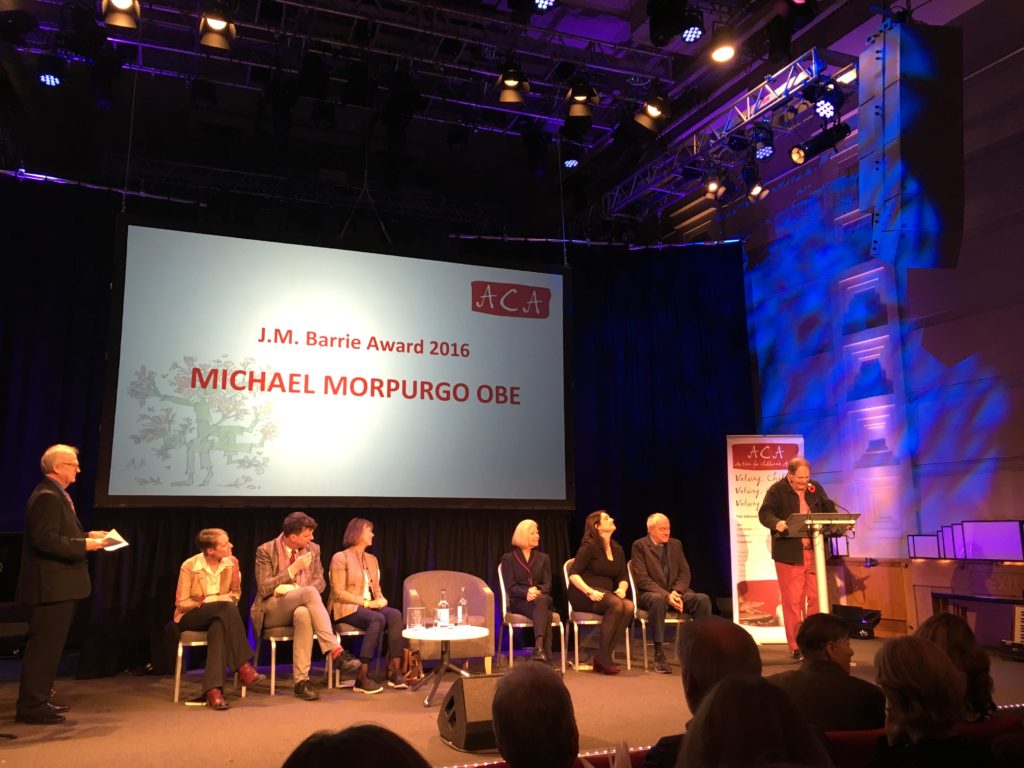 Michael Morpurgo has been awarded the JM Barrie Award for his contribution to children’s literature in a ceremony in the BBC Radio Theatre at Broadcasting House.

The J M Barrie Award is presented annually by Action for Children’s Arts (ACA) to a children’s arts practitioner whose lifetime’s work will stand the test of time.

Michael Morpurgo is the author of over 140 books, with his novels adapted into successful productions for the stage and screen, most notably the National Theatre’s production of War Horse, and most recently Kneehigh’s production of 946: The Amazing Story of Adolphus Tips which ran at the Globe this summer.

He was appointed Children’s Laureate from 2003-2005 and in 2006 Michael was made an OBE for his work in children’s literature.

Michael Morpurgo has said:  “JM Barrie, or Peter Pan, tells us: ‘The moment you doubt whether you can fly, you cease for ever to be able to do it’. Storymakers and storytellers like Barrie, and like all the previous winners of this award, have given us the hope and faith children need, we need, to keep flying, have sustained us through dark and troubled times, have banished doubt. To touch the lives of children, to witness their listening and reading silence, is reward enough in itself. This is simply the icing on the cake. Thankyou, and thankyou dear Mr Barrie. I’ll keep flying.”

David Wood OBE, Chair of ACA: “One of our greatest storytellers, Michael Morpurgo, has thrilled and delighted huge numbers of young readers since becoming a children’s author in the early 1970s. ACA is delighted to recognise Michael’s outstanding contribution by presenting him with the JM Barrie Award 2016.  His work will undoubtedly, like Peter Pan, stand the test of time, making him a truly worthy recipient of this Award.”