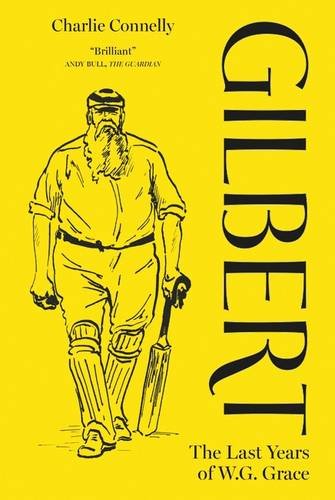 Gilbert: The Last Years of WG Grace, Charlie Connelly’s “delightful account of the doctor’s later years” (Literary Review), has been chosen as one of a six-strong shortlist for the 2016 Cricket Society and MCC Book of the Year Award.

The competition, run by the Cricket Society since 1970 and in partnership with MCC since 2009, is for books nominated by MCC and Cricket Society Members, and is highly regarded by writers and publishers.

Last year’s winner was Dan Waddell’s Field of Shadows: The English Cricket Tour of Nazi Germany 1937. James Astill won in 2014 with The Great Tamasha: Cricket, Corruption and the Turbulent Rise of Modern India.

The £3000 for the winner, and certificates for all the shortlisted books, will be presented at an awards evening in the Long Room at Lord’s on Monday 11 April.

A sell-out audience of 200 people will comprise Members of the Cricket Society and MCC, the shortlisted authors, publishers, and some of today’s finest cricket writers and journalists.

Seventeen books – nominated by either Cricket Society or MCC members (not publishers) – were accepted for the long list and whittled down to six by a panel of judges independently chaired by writer and broadcaster and former England and Somerset cricketer Vic Marks.