Saci Lloyd was born in Manchester, but raised in Anglesey where she spent a lot of time lost in nature or down by the shore.

Saci returned to Manchester as an undergraduate, but soon quit University for a life of glamour. At various points in the glitz she has worked as a very bad cartoonist, toured the States in a straightedge band, run an interactive media team at an advertising agency, co-founded a film company and finally wound up as head of media at NewVIc. She’s now stepped down from that post, but continues her association with the college.

Her first novels, The Carbon Diaries 2015 and The Carbon Diaries 2017, were published to critical acclaim from Hodder Children’s. The Carbon Diaries 2015 was shortlisted for the Costa Children’s Book Award, and the series has been translated into fifteen languages.  She is also the author of Momentum, Quantum Drop and, most recently, It’s the End of the World as We Know It (Hodder, 2015), a comedy set on a parallel Earth.
Praise for Saci Lloyd:
‘engrossing and engaging’ – The Independant
‘Saci Lloyd [has a] fierce intelligence in her writing…which assumes an equally fierce intelligence in its readers.’ – The Bookbag 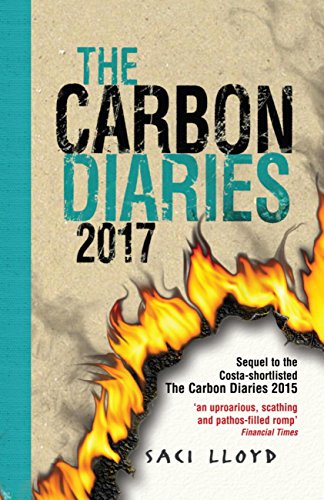 It’s over a year since her last diary and Laura Brown is now in her first year of university in London, a city still struggling […]

More titles
It’s the End of the World as We Know It
More titles
The Carbon Diaries 2015
Picture here..