M. M. Kaye was born in India and grew up there. After school in England she returned to India and lived there throughout her early married life.

She earned international acclaim as the author of The Far Pavilions, a best-selling historical romance set in nineteenth-century India at the height of the British Raj. It was a work of such epic proportions that one American critic was moved to say, ‘Were Miss Kaye to produce no other book, The Far Pavilions might stand as a lasting accomplishment in a single work comparable to Margaret Mitchell’s achievements in Gone with the Wind.’

She went on to write Shadow of the Moon and Trade Wind, also set in India, as well as a series of atmospheric murder mysteries under the collective ‘Death in . . .’ title, which led one American critic to suggest that ‘M. M. Kaye outdoes Agatha Christie in palming the ace’. Her three volumes of memoirs, collectively entitled Share of Summer, are Sun in the Morning, Golden Afternoon and Enchanted Evening. 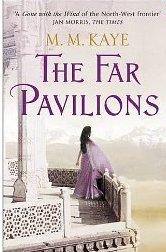