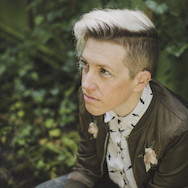 Kerry Andrew is a London-based musician, and author. Her debut novel, Swansong, was published by Jonathan Cape in 2018 and her second SKIN in 2021. She made her short story debut on BBC Radio 4 in 2014 with One Swallow and was shortlisted for the 2018 BBC National Short Story Award.

. Kerry is the winner of four British Composer Awards and is best known for her experimental vocal, choral and music-theatre work, often based around themes of community, landscape and myth. She sings with Juice Vocal Ensemble and has released two albums with her band You Are Wolf: Hawk to the Hunting Gone (2014), a collection of avian folk-songs re-interpreted, and Keld (2018), inspired by freshwater folklore.

Skin, Kerry Andrew’s bold and immersive follow-up to Swansong, begins in London in 1985 with the disappearance of Joe, father to eleven-year-old Matty. Over the […]