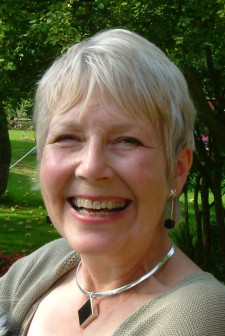 Born talking – allegedly – Julia Jarman was soon telling stories, and decided to be a writer when she was eight. She became stage-struck at school, and went on to read English and Drama at Manchester University.

Julia’s first book was published in 1985 by Andersen Press, who have taken all her novels since, many of which have been short-listed for prizes. Ghost Writer was Highly Commended by the judges of the NASEN award. She has also written a popular series featuring the Time-Travelling Cat.

Andersen published her teen novel, Inside, in January 2010.

Julia also writes for younger readers and has had a number of picture books published, including The Big Red Bath, The Big Blue Train and When Baby Lost Bunny illustrated by Adrian Reynolds; Class Two At The Zoo illustrated by Lynne Chapman (Hodder); and Ants in Your Pants illustrated by Guy Parker Rees.

There is currently a stage show of The Big Red Bath touring theatres in the UK.

Julia has written for several educational series including Ginn’s All Aboard, Collins’ Soundbites and Watts’ Sparks.

Now living in a Bedfordshire village, she is a frequent visitor to schools and libraries at home and abroad. 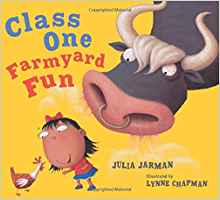 Join Class One as they visit a farm. They see all sorts of animal antics, but they don’t notice the bull, knocking the gate down […]