Jane Rogoyska is the author of Gerda Taro: Inventing Robert Capa. She has a particular interest in the turbulent period from the 1930s to the Cold War in Europe. Her research into the Katyń Massacre of the Second World War led to her first novel, Kozłowski (long-listed for the Desmond Elliott Prize), and Still Here: A Polish Odyssey which she wrote and presented for BBC Radio 4.

Her most recent book is a non-fiction project about Katyń. Surviving Katyń, published by Oneworld, was long-listed for the RSL Ondaatje Prize 2022 and won the Columbia Journalism School’s prestigious Mark Lynton History Prize.

‘To the chilly and brutal abstraction of the phrase “mass grave,” SURVIVING KATYŃ provides an eloquent and crucial clarification: They were individuals, those 22,000 Polish prisoners of war secretly murdered during World War II and buried in a Polish forest. For decades the crime was blamed on the Nazis. As Rogoyska traces with a quietly masterful breadth of detail, however, evidence now proves that Stalin personally ordered the massacre. Thus her book is part detective story, part historical narrative, part biography of the victims, and part moral reckoning with urgent relevance to contemporary conflicts.’ 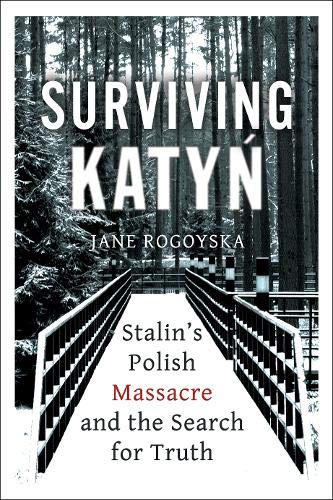 The Katyń Massacre of 22,000 Polish prisoners of war is a crime to which there are no witnesses. Committed in utmost secrecy in April–May 1940 […]