Henrietta Branford was born in India in 1946 and spent part of her childhood in Jordan. In 1980 she moved to Southampton with her husband, the photographer Paul Carter and their three children. Henrietta began writing when she was 40, starting with pieces for a local newspaper, and before long was writing books for children and winning prizes. Henrietta’s books cover the whole range from picture books to teenage novels.

Dimanche Diller, the first in a trilogy about the eponymous heroine, won the Smarties Prize and in 2002 was awarded the Prix Tam-Tam in France; Dimanche and The Fated Sky were both shortlisted for the Guardian Children’s Fiction Prize which Henrietta subsequently won with Fire, Bed and Bone, a title that was also Highly Commended for the Carnegie Medal.

Henrietta was diagnosed with breast cancer in December 1997 and died at home on 23 April 1999. In memory of Henrietta and her Walker Books editor, Wendy Boase, the Branford Boase Award for a first novel was established in 2000. 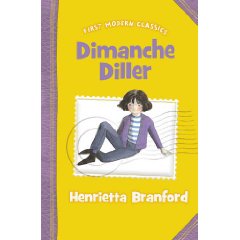