Before her untimely death in February 2020, Heather Couper was a leading international communicator on astronomy and space. She studied astrophysics at Leicester and Oxford Universities and went on to run the Greenwich Planetarium. She later became President of the British Astronomical Association and Gresham Professor of Astronomy.

After presenting two TV series for Channel 4, Heather and two colleagues set up Pioneer Productions – now one of the leading factual TV companies in the UK. She was the producer of Universe, and of the international award-winning programme Electric Skies – the classic film on lightning.

Having left Pioneer to concentrate on a wider range of ventures, she divided her time between writing and broadcasting. Her books, all written in collaboration with Nigel Henbest, include Space Encyclopedia (1999), Universe (1999), Extreme Universe (2001), Mars: The Inside Story of the Red Planet (2001), and A History of Astronomy (2007). 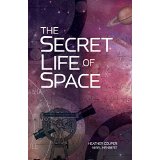 The Secret Life of Space

The definitive guide to understanding the key breakthroughs and discoveries mankind has made to unravel the mysteries of the Cosmos. This engaging and fast-paced narrative […]