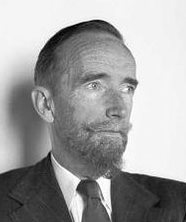 Heard, an author, philosopher, and historian of consciousness and its evolution, took honours in history at the University of Cambridge. Following Cambridge he worked for Sir Horace Plunkett, founder of the Irish Agriculture Cooperative movement. Heard began lecturing from 1926 to 1929 at Oxford University. In 1929 he published The Ascent of Humanity, which was awarded the Hertz Prize by the British Academy. From 1930 to 1934 Heard served as the BBC’s first science commentator.

In 1937 Heard moved to the United States, accompanied by Aldous Huxley. He eventually settled in southern California where from 1941 to 1947 he founded and directed Trabuco College, which specialized in comparative-religion studies and practices. In the USA, Heard’s main activities were writing and lecturing.

A prolific writer, Heard penned some 38 books, the most important of which are his pioneering academic works documenting the evolution of consciousness, including The Ascent of Humanity (1929), The Social Substance of Religion (1931), The Source of Civilization (1935), Pain, Sex and Time (1939), and The Five Ages of Man (1963). Under the name H. F. Heard, he wrote several mysteries and fantasies, including A Taste for Honey (1941) and The Great Fog and Other Weird Tales (1944).