Geoffrey Trease was born in Nottingham in 1909. While at school he produced his own British Boys’ Magazine. This featured “stories of adventure and British pluck from all corners of the globe”. Later he won a classics scholarship to Oxford but gave it up to go and work in London as a social worker in the East End and a struggling journalist on the Bloomsbury fringes. He became a teacher, but soon returned to a writing career.

His first book was published when he was 25 and he went on to write over 100 books for both children and adults. His books ranged through history and included fiction and non-fiction titles. One of his non-fiction books This Is Your Century won the important New York Herald Tribune Award.

Cue for Treason, his most popular and successful book was published in 1940. The setting was a company of strolling players in Shakespeare’s time and a plot to kill Queen Elizabeth I. He never lost his energy and creativity and delighted generations of young readers. 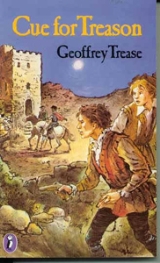 Fleeing from the evil Sir Philip Morton, Peter Brownrigg finds himself on the wrong side of the law – and on the run. As he […]