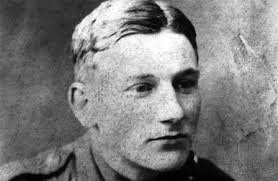 Edmund Blunden (1896–1974) was an English poet, author and critic. Following almost continuous action on the front line between 1916 and 1918, Blunden bore the mental scars of his First World War experience for the rest of his life and wrote of his experiences in both prose and verse, his writing leaving a continuing testimony to the after-effects of war on the human mind. His life-long friend Siegfried Sassoon maintained the Blunden was the ‘poet of the war most lastingly obsessed by it. His prose account of the War, Undertones of War, first published in 1928, remains in print.

Following the war, Blunden worked as a poet, literary editor, journalist, biographer and lecturer, travelling and teaching in England, Japan and Hong Kong. He ended his career as Professor of Poetry at the University of Oxford.

His public honours included the CBE, the Queen’s Gold Medal for Poetry and the Royal Society of Literature’s Benson Medal. He is one of sixteen Great War poets commemorated on a slate stone in Poet’s Corner in Westminster Abbey.