David Wojtowycz took an art foundation course at Cambridge College of Arts and Technology, a BA in Fine Art at Goldsmiths College and an MA at the Chelsea College of Art & Design.

David began his illustration career by creating the Pigs Might Fly and Flux Deluxe greetings cards ranges and then illustrated the very popular and successful picture book series that began with Rumble In The Jungle, written by Giles Andreae. This successful author/illustrator pairing won the picture book section of the Children’s Book Award with The Lion Who Wanted To Love.

A Cuddle For Claude was nominated for the Sheffield Book Award and Claude is now the subject of a popular animated TV series.

Elephant Joe is a Pirate! marked a new direction for David’s art and three further Elephant Joe titles have followed.

David’s bright, exuberant, funny illustrations are perfect for young children – as one enthusiastic reviewer put it: “If I have anything to do with it, my nephew’s first word may be Wojtowycz.” 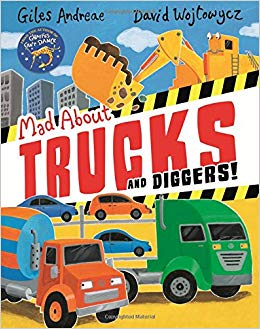 Mad About Trucks and Diggers!

Is your little one mad about trucks and diggers? Then they’ll love this bright, bold book, packed with all sorts of vehicles – including dumper […]