Correlli Barnett is a world-renowned historian. He first achieved fame with The Desert Generals, a controversial study of the 1940–43 North African campaign, and still in print. His subsequent work has ranged from military and naval history to his acclaimed Pride and Fall sequence on Britain as an industrial and imperial power in the world in the twentieth century. He was co-author of the ground-breaking BBC television series The Great War, for which he received the Screenwriters’ Guild Award for the Best Documentary Script.

His other literary awards include the Royal Society of Literature Heinemann Award for Britain and Her Army and the 1991 Yorkshire Post Book of the Year Award for Engage the Enemy More Closely, a study of the Royal Navy in the Second World War.

For his services to military history, he was awarded the Chesney Gold Medal of the Royal United Services Institute for Defence Studies in 1991; an honorary Doctorate of Science by Cranfield University in 1993; and appointed a Commander of the Order of the British Empire in 1997. Correlli Barnett is a Fellow of Churchill College, Cambridge, and a former Keeper of the Churchill Archives Centre. He is married, with two daughters and six grandchildren, and lives in Norfolk. 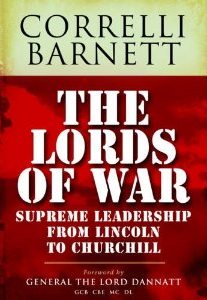 The Lords of War

In this compelling study of leadership, Correlli Barnett examines the strengths and weaknesses of twenty leaders in the nineteenth and early twentieth centuries. He examines […]