Candy Guard is an author, scriptwriter, director, cartoonist and animator. She established her reputation for comic observation and witty dialogue with 13 award winning animated shorts for Channel 4, the BBC and MTV, including ‘Alternative Fringe’ (Best Script British Animation Awards) about a disastrous trip to the hairdressers and ‘Fatty Issues’ (Best Short Film, Ottawa Animation Awards) about a one day diet.

Alongside a highly successful long-running strip in the Observer magazine, ‘P.T.O’ about an incompatible couple, Candy created Pond Life, an animated sit. com. for Channel 4 about the weedy yet feisty Dolly Pond a 20 something everywoman who struggles with life, love and just about anything else you can think of. She wrote and directed 20 episodes and the series won both critical and popular acclaim and numerous awards. It achieved the status of being the only animated series ever to be nominated in the Best Situation Comedy category at the Writers Guild Awards.

Candy has also co-written a screenplay ‘Women in Tropical Places’ with director Penny Woolcock and written and directed animated advertising campaigns for Clear Blue Pregnancy Tester and Ski Yoghurt amongst others.

Her first novel for adults Just a Little Disco on an Open-Top Bus was published by Penguin and she wrote and illustrated a series of books for Macmillan about 12 year old Jennifer ‘Jelly’ Rowntree who is wobbling on the precipice of teenage angst whilst clinging for dear life to the carefree fun and frolics of childhood.

She lives in Catford, London. 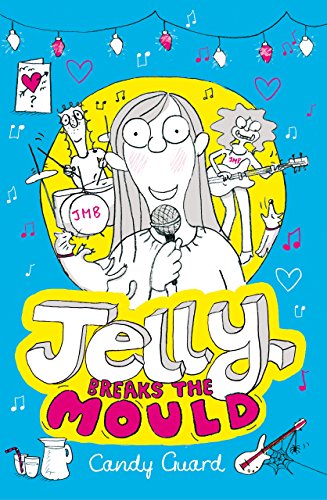 Inspired by the success of her not-so-secret crush, Sandy Blatch, Jelly decides that she needs to become a rock star. That way she’ll get as […]