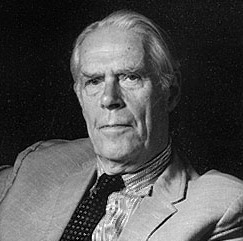 The English author Anthony Dymoke Powell was born on 21 December 1905. He was educated at Eton and Balliol College, Oxford where he met several other young writers including Evelyn Waugh and Graham Greene. Prior to World War II he worked in publishing and as a film-script writer, before becoming a full-time novelist and literary critic.

Powell is probably best known for his twelve-volume novel A Dance to the Music of Time (usually just referred to as Dance). He wrote a number of other novels and a biography of the seventeenth-century diarist John Aubrey. In addition Powell (pronounced Po-ell, by the way) was also a prolific literary critic and book reviewer for a number of periodicals including the Daily Telegraph, the Times Literary Supplement, Punch and the Spectator. He also published four volumes of memoirs, three volumes of diaries and two volumes of his selected literary criticism. He was married to the author Lady Violet Pakenham. Powell died on 28 March 2000 at his Somerset home.