Ann Purser lives in a village in Northamptonshire with her husband, the writer Philip Purser. She has run her own Art Gallery, worked in a village school, kept donkeys, chickens, geese, ducks and guinea fowl, bantams, cats and dogs. She has an Open University arts degree.

She has written a series of Round Ringford novels, which are contemporary stories of village life published by Orion. They include Pastures New, Spinster of This Parish, Orphan Lamb, New Every Morning, Thy Neighbour’s Wife and Mixed Doubles

She is also the author of the Lois Meade Mysteries, starting with Murder on Monday with subsequent titles for each day of the week, ending with Sorrow on Sunday, all published by Severn House in the UK and Penguin in the USA. A further series, starting with Warning at One (2008), charts Lois’s continuing adventures and investigations.

In 2010, Ann embarked on a new series featuring the cantankerous Ivy Beasley who featured in the Lois Meade novels.  Having moved to a retirement home, Ivy puts her naturally inquisitive (some might say nosy) nature to good use as she embarks on a new life as an amateur sleuth. 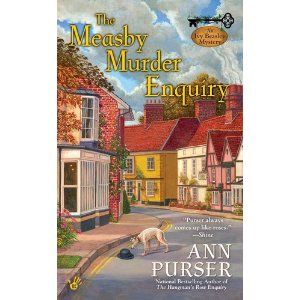 Cantankerous spinster Ivy Beasley has quickly learned that spending her golden years in the quaint village of Barrington won’t be as quiet as she thought. […]